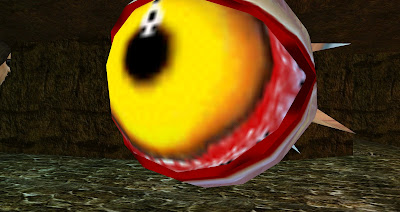 Venturing deep into Lower Guk last night, I came across this baddie. Now, any classic-era EQ player would remember the Evil Eye. Not only did he drop a nice weight reducing bag, but in the early era, he dropped the awesome Manastone. This item was, of course, later removed from loot tables, due to its overpowered nature. However, it was not removed from the game, and those lucky few to possess a grandfathered stone saw its price skyrocket.

Interestingly, during the podcast, the developers hinted that they intended to allow old-world items, that no longer dropped on regular servers, to be be found once more on the Fippy server. It was said that these items would begin dropping about a month after the server launched. Only time will tell if this will include the legendary Manastone. But if so, one can expect screenshots like this to be at a premium, as travelers from all over the world will be heading to Lower Guk for a shot at at this epic item.
Posted by Tremeear at 6:13 AM
Tags: EverQuest, Gaming, MMO